Air pollution is Earth’s greatest environmental health threat, killing approximately 7 million worldwide every year. According to the WHO, 9 out of 10 people breathe air that exceeds their guidelines, with developing countries experiencing the highest levels. Exposure to air pollution thus comes at a cost, as it affects not only our health, but the climate and the economy as well. But what are the exact values? Let’s find out.

Greenpeace Southeast Asia and the Centre for Research on Energy and Clean Air released a report on the economic and health costs of air pollution from burning fossil fuels. They concluded that the total cost of air pollution totalled US $2.9 trillion in 2018, which accounted for 3.3% of global GDP. Broken down, air pollution cost $8 billion per day. This was linked to 4.5 million deaths, with each death associated with a loss of 19 years of life. Of the 4.5 million deaths, 3 million were attributable to PM2.5 pollution, 990,000 to ozone (O3) pollution, and 500,000 to nitrogen dioxide (NO2) pollution. 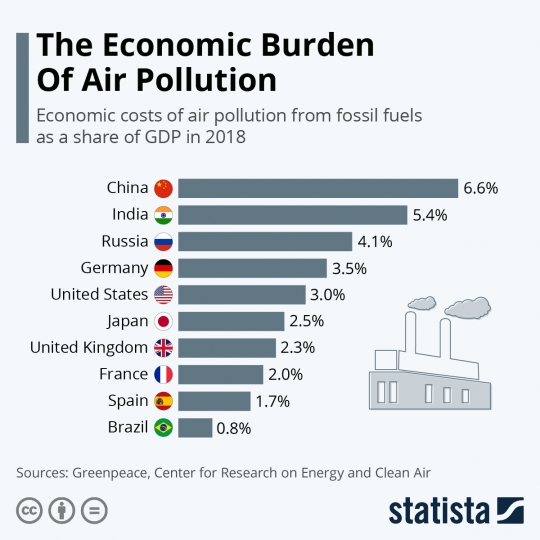 In 2013, The World Bank and the Institute for Health and Metrics conducted a joint study on welfare losses as a result of exposure to air pollution. This value is according to the individuals’ willingness to pay to reduce their chances of dying, and is based on the full economic costs of premature mortality, which includes the loss from individual paychecks, consumption, leisure, good health, and simply being alive. In 2013, global welfare losses from PM2.5 and O3 exposure totalled $5.11 trillion USD. By region, this was:

The health effects of exposure to air pollution have been widely studied, and are thus well-known. They include an increased risk of stroke, heart, disease, lung cancer, and chronic and acute respiratory diseases due to the carcinogenic and irritating properties of the components of various pollutants. Productivity and cognitive functions are also affected, which in turn leads to loss of workforce on top of the resulting healthcare costs. Therefore, in 2018,  fossil fuel PM2.5 pollution specifically was responsible for 1.8 billion days of work absence, 4 million cases of child asthma, and 2 million premature births. When looking at resulting economic costs based on the impact of air pollution in 2018:

There are indirect costs associated with air pollution as well. Ground-level ozone (O3) is a threat to stable crop quality and production, affecting soybean, wheat, rice, maize, and barley. The pollutant creates toxic byproducts when dissolved in water within the plant’s leaves, thus causing damage. As such, O3 is expected to reduce stable crop yields by 26% in 2030, which will impact global food security and nutrition.

A 2016 study by the Organization for Economic Cooperation and Development (OECD) predicted that should things remain unchanged, by 2016 the annual global welfare costs due to premature deaths from outdoor air pollution would total US $18-25 trillion, with the costs of illness at $2.2 trillion.

Air pollution is not an impossible issue to solve, however. UN Environment’s sixth Global Environment Outlook predicts that achieving the Paris Agreement targets for mitigating climate change will cost US $22 trillion. By successfully reducing air pollution, $54 trillion can be saved from the resulting health benefits. The numbers are clear: immediate action against air pollution leads to net savings of $32 trillion. This is great news for our health, our climate, and our economy.

You can do your part. Whether you are an individual, a corporation, or a municipality, there are actions you can take to realize a future of clean air. It all starts with building an air quality network. Being able to identify and track the sources of air pollution is key to implementing policies that will counter it. At Breeze Technologies, that’s exactly what we offer: lower-cost, small form factor sensors measuring for all major pollutants that are integratable with our Breeze Environmental Intelligence Cloud for real-time analysis of air quality data. This option is not only available for companies and government agencies, but everyday citizens as well. Our Breeze Citizen Portal provides comprehensive and hyperlocal air quality data for free to all interested individuals, because we believe clean air is a universal human right. You, too, can sponsor or host sensors for the portal so that we can achieve a society free from air pollution. Contact us today for more information!

Air pollution – How to convert between mg/m3, µg/m3 and ppm, ppb
Scroll to top
Loading Comments...