We breathe 15,000 litres of air every day. Apart from the oxygen (O2) and nitrogen (N2) essential for survival, the atmosphere also consists of many harmful foreign substances. When detectable, they are considered to be air pollution. Air pollution is the greatest environmental risk to health, killing 7 million worldwide every year. In the first half of this series, we took a look at the health impact of indoor and outdoor air pollution. Now it is time to take a closer look at the specific health impact of the pollutants we inhale on a daily basis.

Carbon monoxide is a tasteless, odourless, colourless, and toxic gas. Upon entering the bloodstream, carbon monoxide inhibits the body’s ability to carry oxygen to organs and tissues. As such, extremely high concentrations can cause death. Infants, the elderly, and those with heart and respiratory diseases are particularly susceptible to carbon monoxide poisoning.

Nitrogen dioxide is formed through the oxidation of nitric oxide with compounds like oxygen, ozone, and volatile organic compounds. The gas has been found to have an adverse effect on lung function and the respiratory system, thus aggravating asthma effects and increasing the risks of stroke. It also contributes to the formation of ground-level ozone (O3), and forms secondary particulate matter (PM2.5) when combined with other atmospheric compounds such as ammonia (NH3).

Ground-level ozone is a pale blue gas with a pungent smell. It is mainly formed through the photochemical reactions of other pollutants such as carbon monoxide (CO), nitrogen oxides (NOx), and volatile organic compounds (VOCs) from strong sunlight and UV radiation. Long-term ozone exposure is responsible for 1 million premature deaths a year due to respiratory complications. Chronic effects of ozone include aggravated lung diseases such as asthma, emphysema, and chronic bronchitis, decreased lung function, chronic obstructive pulmonary disease (COPD), and lung cancer.

Sulphur dioxide is a toxic gas with a pungent smell. It is an irritant, and can affect lung function and aggravate pre-existing respiratory diseases like asthma. The gas also forms secondary particulate matter (PM2.5) when combined with other compounds such as ammonia (NH3) in the atmosphere. 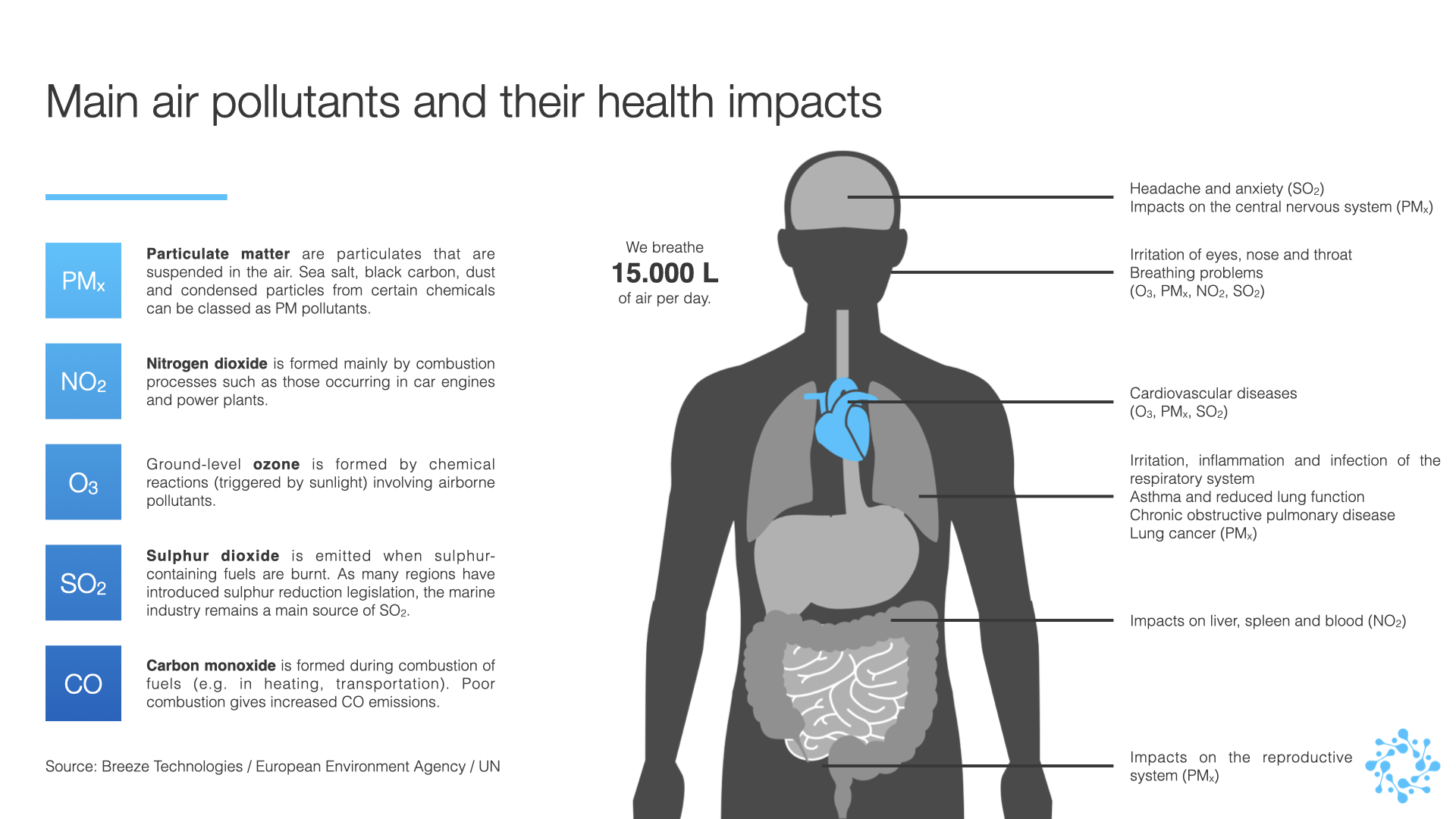 Ammonia is a colourless, corrosive, and pungent gas. It irritates and can burn the eyes, nose, throat, and respiratory tract if inhaled in small quantities. In larger quantities, ammonia is poisonous and can have negative effects on the respiratory system, which includes decreased lung function. Furthermore, ammonia forms secondary particulate matter (PM2.5) when combined with sulphates and nitrates in the atmosphere.

Carbon dioxide is a colourless greenhouse gas with a faint, sharp odour and a sour taste. Exposure to high levels of carbon dioxide has been linked to a decrease in cognitive performance and productivity, inflammation, kidney calcification, bone demineralization, oxidative stress, and endothelial dysfunction.

Methane is a greenhouse gas and a volatile organic compound that has not been found to have any adverse health effects on humans. It is, however, a precursor to ground-level ozone (O3).

Nitric oxide is a colourless, toxic gas. In low concentrations, it functions as a signalling molecule. Thus, the gas has been used for medical purposes, including regulating blood pressure and flow and treating impotence. However, nitric oxide combines with volatile organic compounds (VOCs) to create ground-level ozone.

Volatile organic compounds refer to a large group of carbon-containing substances including hydrocarbons, alcohols, aldehydes, and organic acids. While individual VOC levels tend to be moderate with no expected health effects, concentrations rise to concerning levels after construction works and renovations. Many individual VOCs have been shown to have toxic, carcinogenic, mutagenic, genotoxic, and teratogenic effects on humans. Milder symptoms are characterized by headaches, fatigue, loss of productivity, and sleep disorders, which altogether could be summarized as “Sick Building Syndrome”. More serious health effects include damage to the liver, kidney, and central nervous system, and cancers like leukemia and lymphoma.

What can be done about air pollution?

Government policies and regulations are only effective with accurate, reliable environmental data. Similarly, the first step to improving air quality is to improve a baseline to measure successes against. Breeze Technologies’ high-end, lower-cost sensors measure for all major air pollutants that impact human health, while our proprietary Environmental Intelligence Cloud analyzes and reports the information for easy integration in municipal management processes. By identifying the best practices available for optimization and success, we help create more livable, healthier environments for all.