On Thursday, June 3, 2021, the European Court of Justice (ECJ) found Germany guilty for excessive air pollution in various cities across the country, including Berlin, Stuttgart, Munich, Hamburg, Cologne, and Düsseldorf. The decisive factor for the ruling was exceedingly high long-term NO2 levels. In 2018, the European Commission brought Germany to court over this issue, and found that from 2010 to 2016, Germany “systematically and persistently” breached annual and, in some cases, daily limit values. The press release from the European Court of Justice states:

“Between 2010 and 2016, Germany systematically and persistently exceeded the limit values for nitrogen dioxide (NO2). It also infringed its obligation to adopt appropriate measures in good time to ensure that the exceedance period is kept as short as possible in the 26 zones concerned.”.

The annual average NO2 concentration in Europe cannot exceed 40 µg/m3. This is outlined in the 2008/50/EC Directive on Ambient Air Quality and Cleaner Air for Europe, which is implemented in Germany under the 39th Federal Immission Control Ordinance (BImSchV). The maximum one-hour concentration average may not exceed 200 µg/m3. However, the latter value may go over the limit a maximum of 18 times per year.

Other EU member states like France have also been reprimanded for breaking EU air quality limits. Germany is now obliged to introduce appropriate measures to reduce air pollution as soon as possible. Otherwise, fines could be imposed on the country in a second court case. These are usually ranging around €10 million per day of continual breach of the law.

Although air quality has improved since 2016 (the end period under consideration in the ECJ lawsuit), there are still regular exceedances of the limit values in 6 cities. Due to this ruling, the federal government is now required to act. In Germany, however, the municipalities and the states are the ones responsible for monitoring and complying with air quality standards. It is therefore expected that the federal government will hold cities and states politically accountable. They should thus prepare to implement further air pollution control measures. But what is it exactly that cities and states should do now?

One of the major challenges in today’s clean air initiatives and the monitoring of its successes is the lack of data available. In accordance with the 39th BImSchV, measurements are taken at hotspots where the highest levels of air pollution are to be expected. The data obtained is therefore not representative of air quality across the entire city. This makes it difficult to monitor the success of planned and implemented air pollution control measures.

Breeze Technologies’ lower-cost air quality sensors enable cities to build a much denser measurement network on a smaller budget, thus creating a more accurate representation of air pollution across an entire city. As the next step, Breeze uses artificial intelligence to compare the collected measurement data and further city cadastral data with a catalogue of over 3,500 air pollution control measures to identify the most efficient and effective ones to be implemented. The success of measures that are underway or have been put in action can thus also be monitored in this manner so that adjustments can be made if necessary.

Breeze’s Environmental Intelligence Cloud not only accesses the data collected by the sensors, but also uses satellite data and data from public measuring stations. Existing air quality networks can thus be individually expanded to be more comprehensive.

Another shortcoming of current air quality monitoring networks is that the data is often only available after a long delay and is often not presented in a comprehensible manner. In most cases, the closest monitoring station is several kilometres away from one’s residence. Citizens therefore often feel disconnected to the issues surrounding the air quality where they live as the data lacks personal relevance. This is why Breeze actively involves them in air quality monitoring as sensor hosts as part of our many projects. Citizen participation can increase the acceptance of air pollution control measures. The collected data can also be shared with the public through our Citizen Portal. There, not only is assessed air quality data available in real-time, further background information on the topic is also available. 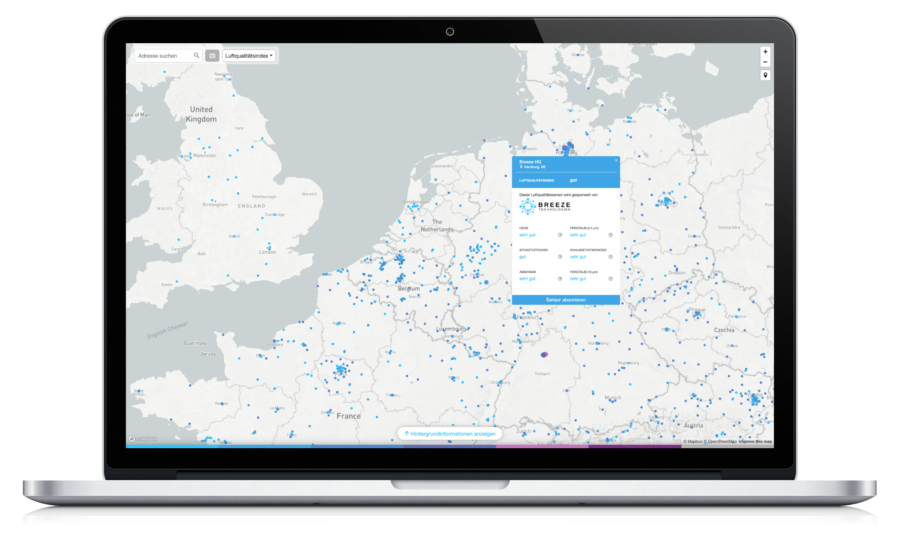 In addition, Breeze Technologies conducts citizen workshops and forums on the topic of air quality in which measurement data and possible air pollution control measures are explained.