As part of the InterLuft project, we are envisioning future use cases of ubiquitous air quality data in our cities: This article is part of a series of visions of the future and thought experiments on how our surroundings might become more environmentally sensitive with the increasing availability of environmental datasets. Read on to find out more!

In recent years, there was a big discussion about the correct height of air pollution thresholds in our cities. Some argued that relatively speaking, people might already exposed to significantly more pollution when sitting close to a candle, or in their workplace.

While it is true that workplace air quality regulation in countries like Germany allows for much higher exposure, the general outdoor air quality guidelines are designed to protect everyone: From healthy individuals in the prime of their lives, to small toddlers and sickly elderlies, air pollution exposure affects people differently. We have previously looked at the health impact of individual air pollutants, as well as overall health effects of air pollution. Pollution exposure can trigger asthma attacks and has negative long-term impacts on more or less everybody. It has been found to increase the risk of cancer and other diseases, mental illness and more.

Exposure time is key: While it may be alright to be exposed to higher levels of pollution for a short amount of time, the longer the exposure period gets, the lower a “safe” exposure amount. Researchers even argue that there is no “safe” amount of air pollution, and we should strive to minimize pollution as much as possible.

While governments are working globally towards cleaner air in our cities (and Breeze Technologies is doing its part to support that work), the newly available hyperlocal quality of air quality datasets can help those that are particularly affected by pollution to protect themselves.

Since the emergence of smartphones and wearables like smartwatches, individual health recommendations are becoming more and more mainstream. Users are receiving reminders to stand up more often, integrate walks into their day to day lives, and even get notified when these gadgets detect threats like abnormal heart rates. It is not difficult to imagine that in the future, these features will also include reports about air pollution exposure based on increasingly available datasets, as well as recommendations for habitual commuting and running routes, based on observed user behaviour. Particularly affected groups like asthmatics could receive alerts when the area in which they currently are is detected to be increasingly hazardous for them. 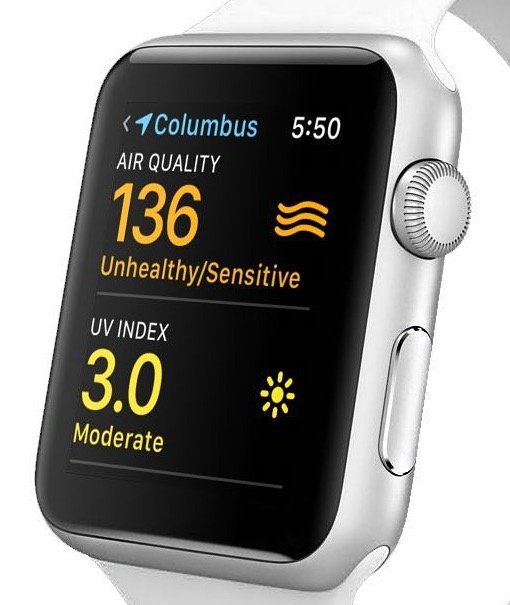 The Apple Watch already integrates air quality data in some locations. This data is, however, still limited in its spatial and temporal accuracy. Source: Apple

At Breeze Technologies, we can imagine two different use cases for air quality data in health management:

Paving the way for healthier cities

There is another inherent benefit of including air quality data in individual health statistics: It raises the population’s awareness for the global air pollution problem. It can be argued that people who are more aware of the issues caused by air pollution will generally also do more to avoid causing it. They might for instance be more likely to switch to less-polluting transportation options, or demand action on air pollution from their municipality’s representatives.

Aggregated and anonymized data will also support researchers in better understanding the global impact of pollution, and help governmental decision makers to understand the scope of the issue and drive targeted action in and for their communities – something that can only be good for everybody involved.