Disneyland, “The Happiest Place on Earth”, is renowned for its brilliant firework shows that run almost nightly year-round. As beautiful as they are, however, fireworks are notorious air polluters. Disneyland has received numerous smoke and noise complaints from nearby residents over the years, prompting them to improve their pyrotechnics and minimize their environmental impact. Let’s dive in and see how they did just that.

Why are fireworks bad for air quality?

Fireworks consist of oxidizers, propellants, fuels, binders, and colouring agents. The original pyrotechnic, black powder (gunpowder) blends an oxidizer (either potassium nitrate or perchlorate) with a charcoal (carbon) and sulfur fuel. When set off, they thus emit smoke and gases such as carbon monoxide (CO), carbon dioxide (CO2), nitrogen oxides (NOx), sulfur dioxide (SO2), and particulate matter (PM). These compounds undergo reactions in the atmosphere to create more pollutants like ozone (O3).

Various metal compounds like barium, strontium, magnesium, and copper are what give fireworks different colours. When released, these toxic aerosols end up in the air, the water, and the soil. As a result, they can cause short- and long-term effects, including vomiting, diarrhea, and asthma attacks to kidney disease and cancer. 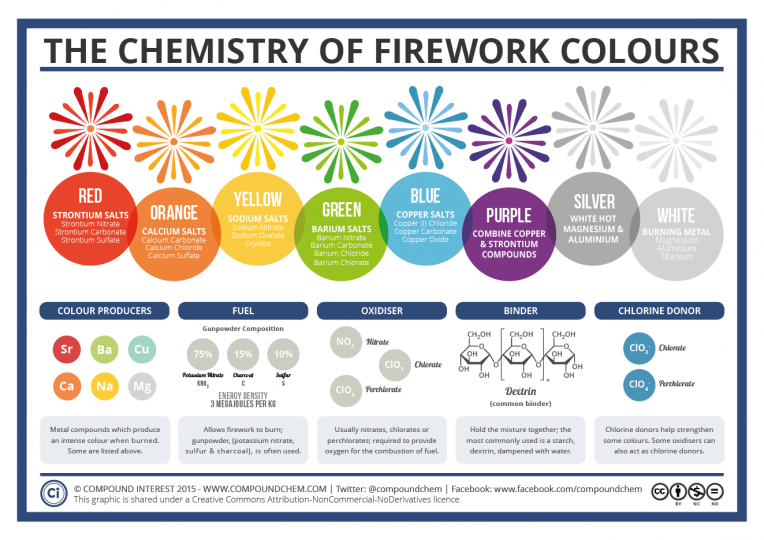 How did Disneyland reduce the emissions from their fireworks?

In 2003, Disneyland reportedly used 90,000 pounds of fireworks every year, though the figure may be much higher now. Naturally, the amount of pollution entering the atmosphere as a result of these shows is concerning. Back in the late 1990s, Disneyland approached the Los Alamos National Laboratory (LANL) requesting them to help develop more environmentally-friendly fireworks after complaints from nearby residents in Anaheim, California. By replacing the carbon in black powder with nitrogen (specifically, nitrocellulose, which is inexpensive and plentiful), hydrogen, nitrogen, and carbon dioxide is emitted instead of smoke and perchlorate. The air we breathe is made up of 78% nitrogen, 21% oxygen, and other gases such as hydrogen and carbon dioxide, thus making this new alternative incredibly clean. Only a small amount of metal salts is needed to produce brilliant colours. As a result, metal content from the fireworks is reduced by 90%.

Regular fireworks have been shown to cause huge spikes in pollution in cities and metropolises. More sustainable options are needed to protect the groups particularly affected by high levels of particulates and other air pollutants. Disney certainly set an example in proving that eco-friendly pyrotechnics are possible through time, effort, and investment. Unfortunately, nitrocellulose fireworks aren’t cost-effective compared to commercial fireworks, most of which are from China and are made from inexpensive materials with very low labour costs. At the end of the day, consumer demand and regulation for the eco-friendly alternative are what’s needed for a cleaner, brighter, and more colourful future.

Breeze Technologies partner of the Hamburg Climate Week for 6th time in a r...
Scroll to top
Loading Comments...