Copernicus is the European Union’s Earth observation (EO) programme. Managed by the European Commission (EC), it was previously known as Global Monitoring for Environment and Security (GMES). Copernicus is currently served by a fleet of dedicated satellites from the Sentinel family developed by the European Space Agency (ESA). The purpose of the programme is to provide information and services for the benefit of European citizens from satellites and in-situ collection points by monitoring the planet and the environment: the atmosphere to the land to the ocean. Let’s take a closer look at just what exactly the Sentinel family of satellites do.

In charge of land and ocean monitoring, Sentinel-1 is composed of two polar-orbiting, all-weather, day-and-night satellites: Sentinel-1A and Sentinel-1B. As a constellation of satellites sharing the same orbital plane 180° apart, the Sentinel 1 carries a C-band Synthetic Aperture Radar (SAR). This advanced radar instrument that allows them to image the entire earth every 6 days. Data is transmitted to ground stations around the world as well as to the geostationary European Data Relay System (EDRS) for full-time, continual data delivery. The Sentinel-1 is used for a variety of purposes, including:

Sentinel-2 is a land-monitoring constellation of two identical polar-orbiting satellites—Sentinel-2A and Sentinel 2B—phased at 180° to each other. It is equipped with a state-of-the-art high-resolution multispectral imager (MSI) instrument, which provides a 290 km swath width and covers all of Earth’s land surfaces, large islands, and inland and coastal waters every five days. The Sentinel-2 mission objectives include: 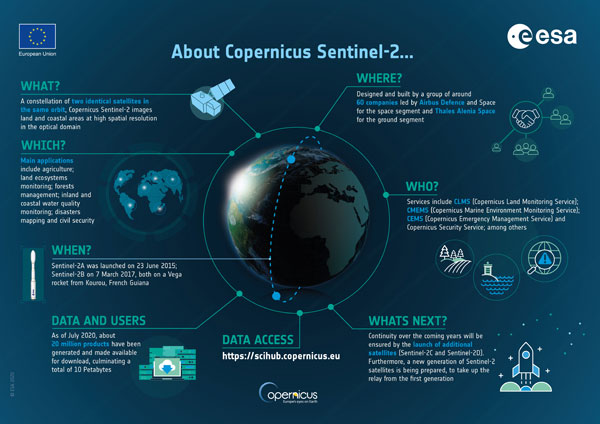 Sentinel-3 is a constellation of two identical satellites: Sentinel-3A and Sentinel-3B. Its main objective is to systematically measure the Earth’s oceans, land, ice, and atmosphere and to provide critical data for ocean, environmental, and climate forecasting. To achieve this, it is equipped with multiple instruments: Sea and Land Surface Temperature Radiometer (SLSTR), Ocean and Land Colour Instrument (OLCI), Synthetic Aperture Radar Altimeter (SRAL), Doppler Orbitography and Radiopositioning Integrated by Satellite (DORIS), and Microwave Radiometer (MWR). Thus, the Sentinel-3 complements the mission of Sentinel 2 with objectives such as:

Sentinel-4 is a future geostationary mission aimed to monitor key air quality trace gas concentrations and aerosols over Europe to support services pertaining to air quality applications and climate protocol monitoring. Consisting of a Meteosat Third Generation Sounder (MTG-S) satellite equipped with an ultraviolet-visible-near-infrared (UVN) light imaging spectrometer, the mission is set to launch in 2021. As the name suggests, this high-rez instrument covers the ultraviolet (305-400 nm), visible (400-500 nm), and near-infrared (750-775 nm) bands in the solar reflectance spectrum, which will allow it to provide hourly data on air pollutants such as formaldehyde (HCHO), glyoxal (CHOCHO), nitrogen dioxide (NO2), ozone (O3), and sulphur dioxide (SO2). It has a spatial sampling of 8 km over Europe and a fast repeat cycle of 60 minutes over Europe and North Africa.

The Sentinel-4, the Sentinel-5P, and the Sentinel 5 were conceived to complement Copernicus Atmosphere Monitoring Service (CAMS), which provides aggregated information on worldwide air pollution, health, solar energy, greenhouse gases, and climate forcing. Hence, the mission objectives of the Sentinel-4 include:

Sentinel-5 Precursor (otherwise known as the Sentinel-5P) is the forerunner to the Sentinel-5 satellite. The main objective of the Sentinel-5P is to measure the trace gases and aerosols in the troposphere that affect air quality and the climate. The Sentinel-5P and the Sentinel-5 are meant to complement the Sentinel-4 as low-orbiting satellites that measure a wider range of pollutants not just in Europe, but around the world. For this purpose, the Sentinel-5P is equipped with TROPOspheric Monitoring Instrument (TROPOMI), which is capable of measuring ultraviolet and visible (270-500 nm), near-infrared (675-775 nm), and shortwave infrared (2305-2385 nm) wavelengths. Key air quality parameters that are being monitored by TROPOMI thus include carbon monoxide (CO), formaldehyde (CH2O/H2CO), methane (CH4), nitrogen dioxide (NO2), ozone (O3), and sulphur dioxide (SO2) as well as climate and ozone/surface UV applications. With a swath width of 2600 km and a resolution of 7 km x 3.5 km, TOPOMI is able to both map the entire planet daily as well as measure the air quality levels of individual cities. Hence, Sentinel 5-P’s mission objectives are:

You can read more about the Sentinel-5P and how it is being used to improve air quality here.

The Sentinel-5 mission, set to be launched in 2021, essentially has the same objectives as its precursor, the Sentinel-5P. Its role is to take atmospheric measurements and provide high spatio-temporal resolution of air quality, climate forcing, and ozone and UV radiation while providing daily global coverage to support European policies that benefit EU citizens. The crucial difference is that instead of TROPOMI, a UV-VIS-NIR-SWIR spectrometer is equipped. This system operates in the ultraviolet to the shortwave infrared range consisting of 7 spectral bands: UV-1 (270-300 nm), UV-2 (300-370 nm), VIS (370-500 nm), NIR-1 (685-710 nm), NIR-2 (745-773 nm), SWIR-1 (1590-1675 nm), and SWIR-3 (2305-2385 nm). Thus, Sentinel 5-P’s main objectives are:

Sentinel-6 involves two satellites: Sentinel-6A was launched in November 2020, while Sentinel-6B is set to launch in 2025. Its primary mission is to provide high-precision information on the topography of the ocean worldwide, while its secondary mission is radio occultation for climate change monitoring and weather forecasting. For these purposes, the Sentinel-6 is equipped with a Synthetic Aperture Radar Altimeter (POSEIDON-4) and a GNSS-RO respectively. The Sentinel-6 has the ability to map up to 95% of the Earth’s ocean every 10 days, with the gathered information complementing the oceanic data from Sentinel-3. Based on its missions, Sentinel-6’s objectives include: