Post-World War II in 1945 saw Germany divided into four zones by the Americans, the British, the French, and the Soviets. The western two-thirds of Germany, known as the Federal Republic of Germany (unofficially: FRG), consisted of the American, British, and French zones. The eastern third, under the Soviets, became the German Democratic Republic (GDR). Opposing economic, social, and political systems began to emerge in the years following the division due to the differences between the occupying powers. The discrepancy in land size, population, and natural resources between the FRG and the GDR also added to a divergence in industrialization. As a result, land, water, and air pollution quickly became an issue, particularly in the GDR. Germany’s reunification took place on October 3, 1990. Let’s take a closer look at how air quality has changed across the country since then.

What was air quality in the former East Germany (GDR) and former West Germany (FRG) like?

Air quality differed between East and West Germany. At the turn of the century, air pollution was the most pervasive problem in the GDR. This is because its primary energy source came from the burning of domestic lignite (brown coal) for heat and energy. High in sulphur and ash content, the burning of lignite thus resulted in high sulphur dioxide (SO2) and particulate matter (PM) emissions. It is estimated that total SO2 emissions in the GDR amounted to 5.8 million tons, the highest in Europe. This is stark in comparison to 3 million tons for West Germany, which had 3 times the population and 2 times the land area. The issue was particularly prevalent in the industrial Leipzig/Halle/Weißenfels/Bitterfeld region of the GDR. In the 1980s, annual sulphur dioxide levels were over 400 μg/m³. This was 4 times higher than in the West German Ruhr area, the economic powerhouse of local industries. In comparison, the highest sulphur dioxide measurements in the region are at around 10 μg/m³ today. In central Germany, annual particulate matter levels were two times higher than in the Ruhr district at values of 150-200 µg/m³.

The environmental issues from the GDR naturally also affected West Germany, as air pollution does not stop at borders. However, it was not strictly a one-way street: depending on wind conditions, SO2 and PM emissions alternated between lignite power stations in Harbke (the East) and Buschhaus (the West). In fact, SO2 concentrations have also reached over 1,000 µg/m³ in certain areas of the FRG. The difference, however, lay in government actions: the West declared smog alerts, warned the populace, cut back on industrial production, and imposed driving bans, while the East did nothing. 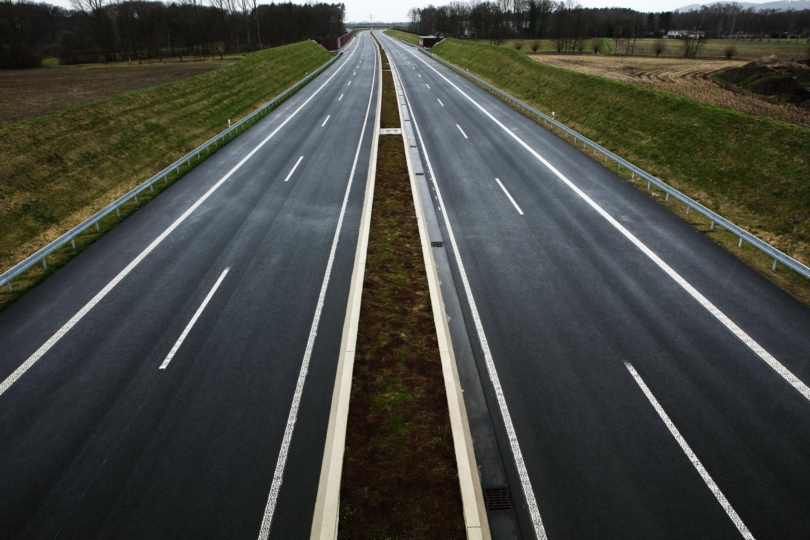 The international oil crisis of 1973 led to the banning of driving on Sundays in the FRG. This initiative was known as „Autofreier Sonntag“ in German. Image source: https://unsplash.com/photos/VBsEtYuHHSU

An environmental protection framework agreement between the East and the West was considered in late 1972, though the GDR stopped negotiations the following year. This was due to the establishment of the German Environment Agency (Umweltbundesamt – UBA) in West Berlin in July 1974, which the East considered to be a breach of the Four-Power Agreement. The clause stated that West Berlin was not part of the FRG, but acknowledged special relations with the region. While there were negotiation attempts at joint work targeting pollution issues between the FRG and the GDR, no real changes ultimately took place. In 1983, the FRG enacted the Large Combustion Plants Ordinance, which effectively limited SO2 emissions from power and industrial plants and led to a rapid and significant fall in air pollution in the west. On June 6, 1986, the FRG founded the Federal Ministry for the Environment, Nature Conservation, and Nuclear Safety (Bundesministerium für Umwelt, Naturschutz und nukleare Sicherheit – BMU). These actions would become cornerstones in implementing environmental policies and changes for a cleaner, healthier Germany come reunification.

How did air quality in Germany develop over the years?

As previously stated, the main sources of sulphur dioxide emissions in both East and West Germany were power, heating, and industrial combustion plants and households. From the graph above, SO2 emissions remained consistently high in Leipzig/Halle/Weissenfels/Bitterfeld areas of the GDR all the way until reunification in 1990 due to the power plants lacking filter systems. In comparison, SO2 emissions in the Ruhr district of the FRG were on a constant, steady state of decline until 1990 and beyond thanks to the implementation of the Large Combustion Plants Ordinance of 1983.

The social and political changes brought by the reunification of Germany in 1990 led to significant changes in air quality: sulphur dioxide emissions dropped by 60%, while particulate matter emissions dropped by 82%. This was initially caused by low demand for products and energy as a result of unification, which led to a collapse of the industrial and agricultural structure in East Germany. Later, the closing and rehabilitating of power stations and industrial plants along with a series of air pollution controls introduced between 1992 and 1996 was what ultimately drove air pollution down. These included transitioning from coal to liquid and gaseous fuels, reducing the sulphur content of coal, and retrofitting lignite power plants with flue gas desulphurization systems. It wasn’t until 2000, however, that air pollutant concentrations in both east and west Germany ceased to differ. 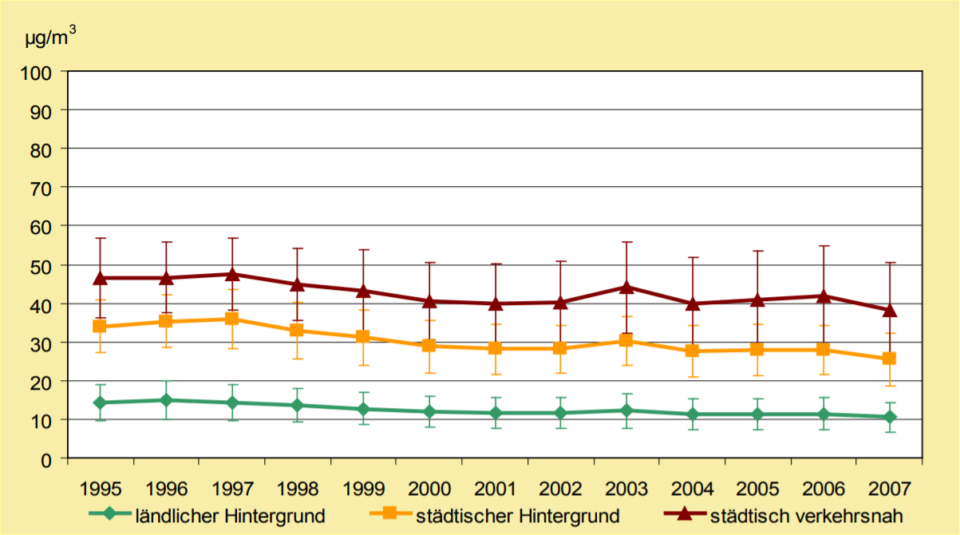 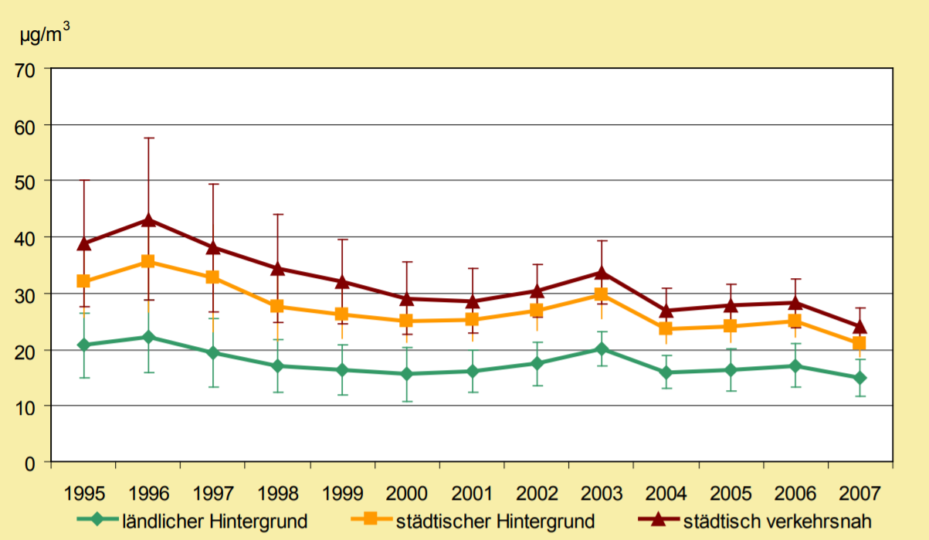 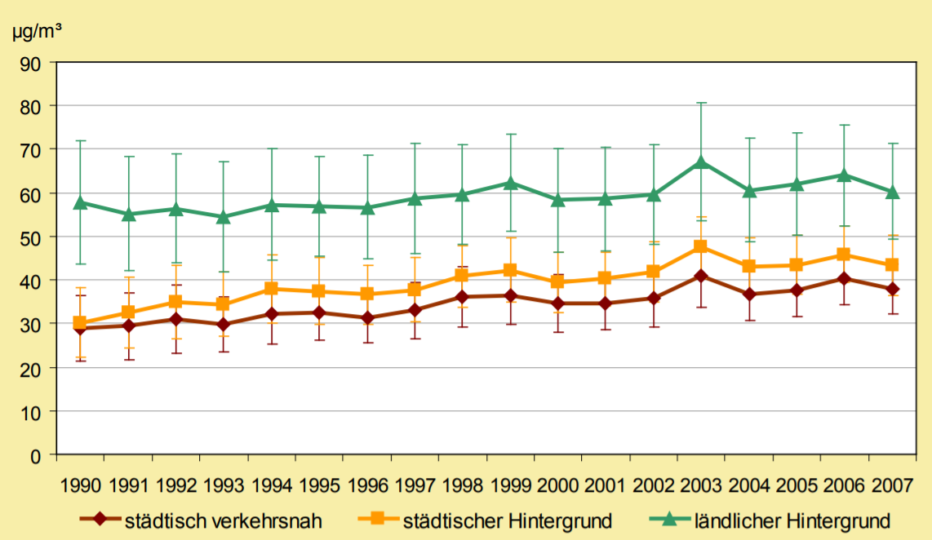 Today, nitrogen dioxide (NO2) and particulate matter (PM) pollution remain as issues in metropolitan German cities. The most recent data shows that while ozone (O3) and particulate matter (PM) limit levels were met in 2019, nitrogen dioxide remains a problem in 25 cities due to road traffic from diesel vehicles. This number is expected to drop considerably given Germany’s efforts in reducing air pollution.

The graphic above also shows that ambient ozone levels have typically been higher in the countryside than in cities. The are 3 reasons for that:

Germany’s strategy for air pollution control is based on four pillars:

The policy instruments Germany has put in place for curbing air pollution include:

Thanks to the implementation of these policies, total emissions of reunited Germany have dropped by over 35% since 1990. However, the country, along with the rest of Europe, is striving to become climate neutral by 2050. At Breeze Technologies, we offer solutions to assist with urban air quality monitoring and with industrial emissions monitoring to ensure that the government policies in place are being met. Our lower-cost, small form factor sensors measure for all the major pollutants outlined in the EU Directives, are easy to set up, and provide comprehensive, real-time data straight to your smart devices. You can visit our Breeze Citizen Portal to see our air quality sensor network in action in cities across the globe. Contact us today for a climate neutral future!